A JOURNEY WITH JESUS THROUGH PASSION WEEK

On this day, Jesus entered Jerusalem riding on the back of a young donkey. Crowds of people were gathered around Him shouting, “Hosanna!” What did they mean when they shouted this? The English word hosanna comes from the Greek phonetic spelling of the Hebrew phrase “hoshiya na” which means, “Help, save me!” This Hebrew phrase appears only once in the Bible in Psalm 118:25. This was followed in v. 26 with the exclamation, “Blessed is the one who comes in the name of the Lord.” From the era of the Old Testament to the New Testament, the meaning of hosanna changed. When Jesus made His triumphal entry into Jerusalem on Palm Sunday, the shouts of “Hosanna!” meant, “Salvation has come! Hooray!” It was a shout of praise to the One who brings salvation!

Reflect on the time when you received Jesus as Lord and Savior. Offer up “Hosanna!” to Him with gratitude for what He has done for you.
Think of someone you know who needs salvation. Pray that the Good News of Jesus would touch that person and bring him into a relationship with God.

Passion Week (Feature)WEEKPassion Week is the time between Palm Sunday through Easter Sunday. It is described as Passion Week because of the passion that Jesus displayed when He willingly went to the cross to suffer and die for the sins of all mankind. What was it like for Him to go through this week? Take a journey with Jesus and contemplate how the events of that week impact you personally. Each day of this Passion Week, join us for a new reflection on Jesus’ journey.

I was asked to share a story to illustrate why I’ve chosen to stay at FCBCLA since birth.  I was the first child born after our church was established.  Even though FCBCLA is celebrating its 63rd anniversary, I’m not quite 63 years old. This story illustrates why FCBCLA is still my spiritual “home.”

In junior high, Kenny was my RA counselor and basketball coach.  A strict disciplinarian, he taught me the value of hard work, mental toughness, and a no-nonsense approach to life.  We kids would be goofing off, but when Kenny walked by, we stopped until he was out of sight and then resume goofing off.  I remember vividly how he taught me toughness during basketball practice.  I admit it, I was a “mama’s boy” and got pushed around a lot underneath the basket.  During a rebounding drill, he had me rebound underneath the basket and shoot the ball back up.  The first time, he blocked my shot from behind. The second time, he fly-swatted the ball out of bounds. I was about to cry.  Kenny shook his head and said, “Watch.”  We switched places and I stood behind him.  He rebounded, stuck his butt out to “create” space around him, faked, and took the shot back up.  “Now you do it.”  I never had my shot blocked from behind again.

Somehow, I got assigned to Kenny’s cabin during one summer camp.  When I found out, I almost cried again.  Not really, but I can tell you I was NOT looking forward to that camp.  True to form, after we picked up our luggage and got into our cabin, Kenny’s first order of business was going over the ground rules for the cabin.  No other cabin had ground rules, but Kenny had his and it created order when camp could just have been about fun and goofing off all the time.  Instead, I learned about having fun and goofing off at the appropriate time.  Years later when I became a camp counselor, you know what I did with my campers the first time we gathered together?  You guessed it. I laid down the ground rules.  I saw the value in order and discipline, and the kids had a great camp. I got to sleep at night without having to worry about kids sneaking out or falling asleep during worship because they slept when they were supposed to.

Fast forward a lot of years.  My wife Suzie came home one day and told me we had to pray for Kenny.  He was really sick and it did not look good.  Up to that point, I had not heard from nor seen Kenny for a long time.  I hadn’t thought about him at all until that moment.  I had a lot of questions. Was Kenny still going to FCBC?  Was he still walking with God?  Was he still mentoring others?  The answers didn’t really matter as I prayed.  I prayed fervently as if my own life depended on God answering my prayer to restore his health.  This was my friend and mentor. I wanted him to live and not just live, but to live a life rededicated to God.  It was a long struggle, but God restored Kenny to full health.  The best part of this story is that Kenny came back to serve in RA’s again.  He is literally and spiritually a new man.

Why do I call FCBCLA my home?  Over the years, many people have come and gone.  Many pastors have come and gone, but what is the one constant?  God has been faithful to preserve His church. This is where God’s grace was given for my salvation. I’ve witnessed restored lives. I was given opportunities to reach out and support the local body of Christ.  This is where I was born, raised, and God willing, I will be buried. So dramatic, but true. 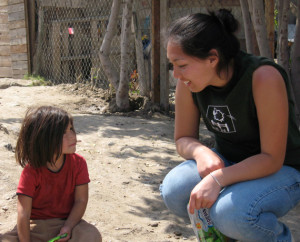 Eight years ago, I went on my first Amor trip to Tijuana, Mexico. I decided to go because I had a heart for Spanish speakers, and the idea of building a house caught my interest. In two days, I was captivated by the interaction with the Mexican people, serving them in a very tangible, hands-on way, and seeing how the house brought so much hope. It was a magnetic experience that has drawn me back four times since then. God has grown my love for the Mexican people and affirmed how much a house blesses the families. I keep going to Mexico, sleeping in tents, and mixing endless tubs of concrete because of an ongoing desire for the Mexican people to experience the love of Jesus.

Participating in these house-building trips has allowed me to see beyond the comfortable, yet so easily complained about life here in the US. It is striking to experience the joy and generosity of the Mexican people, though materially, they have so little; it puts how much I have and what it means to be grateful into perspective. This has propelled me to use what God has given me – two hands and broken Spanish – to serve Him, allowing me to see Him work through my humble willingness. The fact that in two days, a team of non-construction people, without power tools, can build a foundation and erect the frames of a house is a testimony in itself to God’s power and grace!

Every year at the end of our last workday, I am burdened with the hope that the family experienced God’s love because of our work and that this would bring lasting spiritual change in their lives, even after we leave and the house is completed. I hope and pray that out of God’s grace, they would not just receive a house, but receive His salvation. May God use our work and the houses we build to be a powerful and enduring testimony of the hope, goodness, and love of Christ both to the family and to the community.

Welcome to First Chinese Baptist Church, Los Angeles (FCBCLA)! We are a multi-generational, multi-lingual church in the heart of Chinatown. We are passionate about teaching the Bible, growing authentic disciples, and sharing the good news of Jesus Christ. This is a place where your entire family can come to worship, fellowship, and serve together whether you’re nine or ninety years old, speak Cantonese, Mandarin or English. … END_OF_DOCUMENT_TOKEN_TO_BE_REPLACED